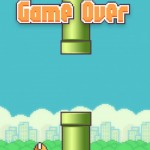 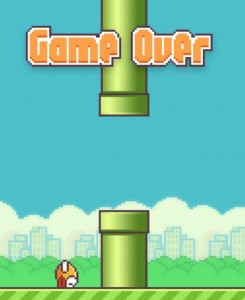 The meteoric rise and fall of the insanely popular iPhone game “Flappy Bird” offers an opportunity to reflect on the uncanny ability of mobile apps to entertain–and addict.

We’ve all heard stories of hardcore gamers who don’t leave their living rooms for days on end while playing World of Warcraft. Even the most dedicated WoW player, however, has to get out and do grocery shopping sometime–even if that means leaving their beloved Xbox at home.

Not so for mobile apps like the seductively trivial Flappy Bird, a game where tapping your thumb flaps the wings of a tiny bird just enough to raise him through a series of pixelated pipes. Although its aesthetics derive straight from Mario, this trivial pursuit takes only seconds to play; and since it’s in your pocket on your phone nothing stops you from trying to best your high score while waiting in the checkout line at Hannaford.

What are the lessons to learn from the polarized reactions produced by this shortlived sensation? One may be that success can be costly, as Wired’s account of the reason developer Dong Nguyen pulled the game:

Inside the Brief Life and Untimely Death of Flappy Bird

For months, Flappy Bird did about as well as Nguyen’s other games, which is to say few had ever heard of it. [Then] something changed — someone besides Nguyen sent the first tweet about the game.

“Fuck Flappy Bird,” it read in its entirety.

The game was aggravating, but addictive. And because misery loves company, players who found it wanted to vent. Throughout November, Flappy Bird slowly added users. Reviews began trickling in: One per day, then three, then 20. Its growth seemed based entirely on word of mouth as players expressed their love-hate relationship with Flappy Bird. Nguyen took to Twitter to interact with his slowly growing fan base, even promising to port the game to Android.

By the end of December, Flappy Bird had clawed its way to No. 80 on the U.S. App Store’s “Free Games” chart. Then it took off. Its popularity began growing exponentially as more and more users took to Twitter to complain about its brutal difficulty. Nguyen became increasingly excited as Flappy Bird broke the top 40 most downloaded free iPhone games. Then it was in the top 10.

On January 17, it went to number one, the most popular free app in the world.

Fans began writing hilarious five-star reviews, claiming the game was ruining their lives. “I’m sitting in the bathtub writing this review, warning you NOT to download it,” one wrote. “My family doesn’t dare enter. My brother hasn’t taken a shower in a month.”

“All it takes is seeing the words ‘Flappy Bird’ until you find yourself, 19 hours later, fingers bleeding, screen cracked, eyes duct taped open, insomnia and paranoia set in, so determined to pass the devil bird through the impassible gates that you would sacrifice every part of your body except your thumb if it helped beat your high score,” wrote another….

Ironically, the success of this featherbrained timewaster turned out to be its undoing.

Before long, though, the negative attention on Flappy Bird started to block out the positive comments. Flappy Bird’s continued hold on the App Store’s number one spot brought increasingly vile online harassment, some of it racist in nature. There were also death threats. As hundreds of people continued to sending tweets to say they hated the game and hated Nguyen for making it, his self-assurance began turning into self-doubt: “And now, I am not sure it is good or not,” he wrote on Twitter.

Slowly, even mundane comments began to wear him down. He apologized profusely to fans who complained about the slow pace of releasing a version of Flappy Bird for Windows phones. “I am really sorry I cannot keep my promise but I am trying really hard,” he wrote….

As the week went on, Nguyen had gone from confident to unsure to depressed. “I can call Flappy Bird [a] success of mine,” he wrote on Twitter. “But it also ruins my simple life. So now I hate it.”

“Good,” someone replied. “Everyone else hates it too.”

By Saturday, Nguyen had stopped laughing. He decided to take Flappy Bird off the market….This only increased the attention and harassment directed towards Nguyen. “If you delete flappy bird I’ll kill myself,” wrote one player, including a disturbing photo of a woman with a handgun in her mouth….

People couldn’t understand why Nguyen would delete an app that was making him so much money. To be fair, Flappy Bird probably still is making money, since Apple iAds still are being served to the more than 50 million devices on which the game was installed. Nguyen also has left his two other mobile games up on mobile marketplaces, and the global attention on Flappy Bird has sent them skyrocketing up downloads charts.

So the answer to why Nguyen shut down and pulled his game might just be that he genuinely wants people to leave him alone and stop playing Flappy Bird.

If engineers can build something, the thinking goes, they do. Whether they should is beside the point. People will eventually adapt, engineers believe, just as they always have….

Adapting to a new technology is like a love affair, said Ellen Ullman, a software engineer and a writer of essays and novels about the human element of computing. The devices, apps and tools seduce us, she said, and any doubts or fears we had melt away…But we cannot rely on the makers of new technology to think about the moral and privacy implications, she said. “There is not a lot of internal searching among engineers,” she said. “They are not encouraged to say, ‘What does that mean for society?’ That job is left for others. And the law and social norms trail in dealing with the pace of technical changes right now.”

Take, for instance, Google Now. It is the most visible of an emerging crop of apps that perform what engineers call predictive search — sending you information they think you need even before you ask for it. Among everyday users, there is often a visceral negative reaction to such apps. They give too much information to advertisers or the government, people fear, and eliminate the unpredictability of human existence….

The first day I used Google Now, my phone buzzed to tell me I needed to leave in 15 minutes for my restaurant reservation, because there was traffic on the way.

The thing is, I had never told my phone I had a reservation. Or where I was, or the route I planned to take. Google had spotted the OpenTable reservation in my Gmail in-box, knew my phone’s location and checked Google Maps for traffic conditions.

I was creeped out.

But a few days later, as I was beginning to pack for a trip to Portland, Ore., Google Now sent me an alert with the weather there. It had noticed the flight reservation in my e-mail and figured I would be packing a couple of days before. That somehow felt considerate.

Now I trust it to tell me whether there is a delay on my route to work (even though I never told it where I live or work), how many steps I walk each month, which recipes I should try, when my e-commerce packages have shipped and whether I need to remember to buy diapers next time I am at the store.

Not creeped out by the intrusion of apps like Google Now into everyday life, you say? Then you need to watch this video by Charlene deGuzman–because you’re featured in it.

Ms. deGuzman’s video makes for some discomfiting viewing. It’s a direct hit on our smartphone-obsessed culture, needling us about our addiction to that little screen and suggesting that maybe life is just better led when it is lived rather than viewed. While the clip has funny scenes — a man proposing on a beach while trying to record the special moment on his phone — it is mostly…sad.

“I came up with the idea for the video when I started to realize how ridiculous we are all being, myself included, when I was at a concert and people around me were recording the show with their phones, not actually watching the concert,” Ms. deGuzman said.

On the other side are what we might call “app-ologists”: digitally savvy observers like Randall Munroe, the cartoonist of XKCD, and researcher Dana Boyd, who make the case that some gizmos help us experience life in new ways rather than detach from it altogether.

Memo To Parents and Society: Teen Social Media “Addiction” Is Your Fault – Slashdot

If kids can’t socialize, who should parents blame? Simple: They should blame themselves. This is the argument advanced in It’s Complicated: The Social Lives of Networked Teens, by Microsoft researcher Danah Boyd. Boyd … has spent a decade interviewing hundreds of teens about their online lives. What she has found, over and over, is that teenagers would love to socialize face-to-face with their friends. But adult society won’t let them. “Teens aren’t addicted to social media. They’re addicted to each other,” Boyd says. “They’re not allowed to hang out the way you and I did, so they’ve moved it online.” It’s true. As a teenager in the early ’80s I could roam pretty widely with my friends, as long as we were back by dark. Over the next three decades, the media began delivering a metronomic diet of horrifying but rare child-abduction stories, and parents shortened the leash on their kids. Politicians warned of incipient waves of youth wilding and superpredators (neither of which emerged). Municipalities crafted anti-loitering laws and curfews to keep young people from congregating alone. New neighborhoods had fewer public spaces. Crime rates plummeted, but moral panic soared. Meanwhile, increased competition to get into college meant well-off parents began heavily scheduling their kids’ after-school lives.