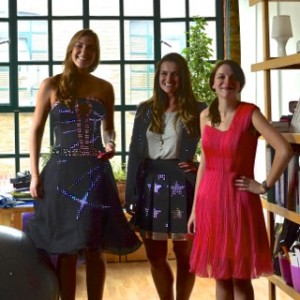 New Media major Katherine Bartos has an article up on the department website describing her revelations during a trek from Prague to London by a dozen students led by faculty member Mike Scott. Along the way they caught up with new media pioneers like Don Foresta, Michael Joyce, and Pavel Smetana. One of the moments that struck many of them the most was a visit to CuteCircuit, the wearable tech lab run by Francesca Rosella and alumnus Ryan Genz.

Genz and Rosella may be best known for their Hug Shirt, named one of Time Magazine’s Best Inventions for 2006 and first prize at Bilbao’s Ciberart conference. Sensors embedded in the shirt can give the wearer a sensation of intimacy sent by a distant sweetheart.

In their London studio, undergrads demoed dresses and skirts that CuteCircuit designed for Katy Perry’s concerts, whose LEDs are synchronized with the show. CuteCircuit has also designed dresses whose microelectronics run a cell phone, iOS, and Twitter.

Katherine Bartos described the trip, which included extended visits with new media innovators in Berlin and Paris, as a “life-changing experience” that “opened my eyes to new ways of doing things.”