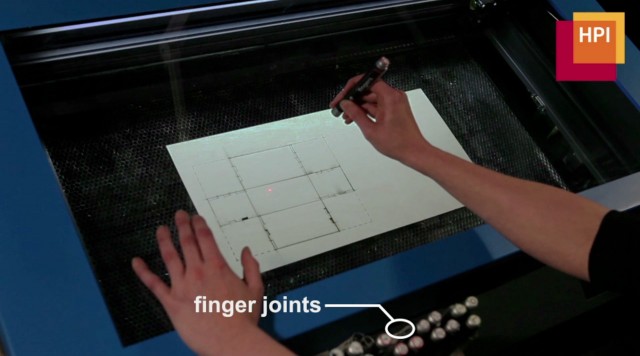 Using a hand-held laser pointer, the constructable – an interactive drafting table, allows users to interact directly with the laser cutter by drafting directly on the workpiece.

The system tracks the pointer using a camera mounted above, beautifies its path, and implements its effect by cutting the workpiece using a fast high-powered laser cutter.

Data artist extraordinaire Aaron Koblin is also messing around with lasers, though in his case he’s deploying them over an entire canyon to create mesmerizing desert light paintings.

Wallit, meanwhile, lets you create your own virtual wall and write on it.

It’s unclear how long it will take for ads to turn these virtual messageboards into virtual billboards.

Wallit app users have the option to leave a note on a virtual wall that’s superimposed over a real location. Depending on whether the wall is private or not, users within Wallit’s social network can use their phone’s camera to capture an image of that building or structure — such as the Golden Gate Bridge, for example — and see what people have written around it, as well as other data that might be available.

Maybe you’ve got your hands full and can’t be bothered with a pen or a phone. Samsung’s got you covered.

Samsung’s Galaxy S IV will feature software that uses eye tracking to scroll content on the screen, according to a report from the New York Times on Monday. When the phone senses that readers’ eyes have reached the bottom of the screen, it will page up the content on the screen so that users don’t have to swipe, the report says.

Plus new interfaces for coding and storytelling.

Writing code on an iPad is a seductive idea with a lot of technical hurdles. That’s why developer/entrepreneur/Y Combinator alumnus Darshan Shankar created Binary, an iPad app that lets you write, test, and run code from just about anywhere.

Here’s an exciting possibility for automatically adding links, images, and movies to your story.

Every story has a beginning

I can use the combination of Linked Open Data and some fairly simple web technologies to build a richly-contextualised narrative.

Don’t forget the feedback–an essential design component in today’s world of auto-updates and friend requests. Smashing Magazine breaks it down for you in this cogent piece.

Look for patterns of repeated behavior, and list the ones you find. These behaviors could span time, digital and physical space, channels of communication, and even different people. Look closely at user actions that trigger a notification sent to them or others. Investigate places where users communicate with each other or with employees, either directly or indirectly. These areas are fertile ground for feedback loops, and you should be able to draw up a robust list without much effort.