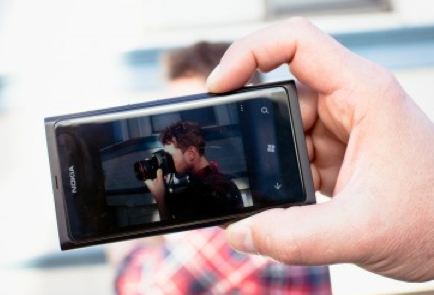 Film buffs may not like it, but mobile devices are changing the way people shoot and consume movies. Take the popular video-sharing service Vine, which is responsible for the proliferation of six-second movies that sit up tall instead of lying horizontally across your screen.

Wired’s Gadget Lab has its underwear in a bunch over people shooting video with their phone held upright.

That’s Not How You Use That: Shooting Video in Portrait Mode | Gadget Lab | Wired.com

Videos, unlike photos, are almost universally presented horizontally. There’s a reason for this: It’s how we’re built to view the world. Our vision allows us to see more to the left and right than top and bottom. So when you shoot a video on your smartphone in portrait mode, you’re violating not only the set video standard, but also the laws of nature as they pertain to human sight.

It doesn’t help that video apps like Vine encourage you to shoot video while holding your phone in portrait mode. Sure it creates a square video, but it’s a bad precedent. So the next time you feel compelled to capture video on your smartphone, imagine what it will look like on your HDTV. If you see it in your mind’s eye as a video with enormous black bars to the left and right of the action, turn your phone sideways.

Some may think crowdsourcing is for the birds–literally–but Airbnb thinks crowdsourcing could work as well for videos as for couch surfing.

Airbnb Is Making a Short Film Out of Vines (And So Can You!) | Underwire | Wired.com

After months of Vine being used–with varying levels of success–to promote movies, the six-second video app is being used to make one. The effort spearheaded by Airbnb is called, appropriately, Hollywood and Vines.

The idea is deliciously simple. Today, the room-sharing service started tweeting shot directions (“a paper airplane soars,” “cup is thrown into a recycle bin”) marked with the hashtag #AirbnbHV. Aspiring Vine directors were asked to record a submission and post it to Twitter.

Are these deviations from the cinematic norm a reaction to a Hollywood that’s gone stale? If so, Slate knows why.

The Book That Is Making All Movies the Same

This Slate story explains how a 2005 book has led to all Hollywood movies following the same structure — to a depressing extent. From the article: ‘…Summer movies are often described as formulaic. But what few people know is that there is actually a formula–one that lays out, on a page-by-page basis, exactly what should happen when in a screenplay. It’s as if a mad scientist has discovered a secret process for making a perfect, or at least perfectly conventional, summer blockbuster. The formula didn’t come from a mad scientist. Instead it came from a screenplay guidebook, Save the Cat! The Last Book on Screenwriting You’ll Ever Need. In the book, author Blake Snyder, a successful spec screenwriter who became an influential screenplay guru, preaches a variant on the basic three-act structure that has dominated blockbuster filmmaking since the late 1970s.’ I’ve always known we could be manipulated — but this provides a segment by segment, almost minute by minute, guide how to do it.

In the Internet age, even six seconds may seem like a long time to some people. What if you could see a film’s plot all in one glance, in a single image?

If you are both a movie buff and a map addict, this is going to be fun.

These wonderfully detailed maps show character journeys and iconic locations in some classic adventure movies. Can you guess which movie each map represents?

Some loopy ideas to enhance the photographic process will never die, no matter how rank. Take Smell-o-rama.

Designer Amy Radcliffe has created an ‘analog odor camera’ that can be used to recreate a smell. From the article: ‘When a smell source is placed under the device’s glass cone, a pump extracts the smell via a plastic tube. After being drawn to Madeleine’s main unit, the smell goes through a resin trap which absorbs the particles so molecular information can be recorded. That data is expressed in a graph-like formula, which essentially contains a fingerprint of the smell. In a special lab, that formula can then be inscribed on a bronze disk to artificially reproduce the smell. The smell can also be recreated in small vials.